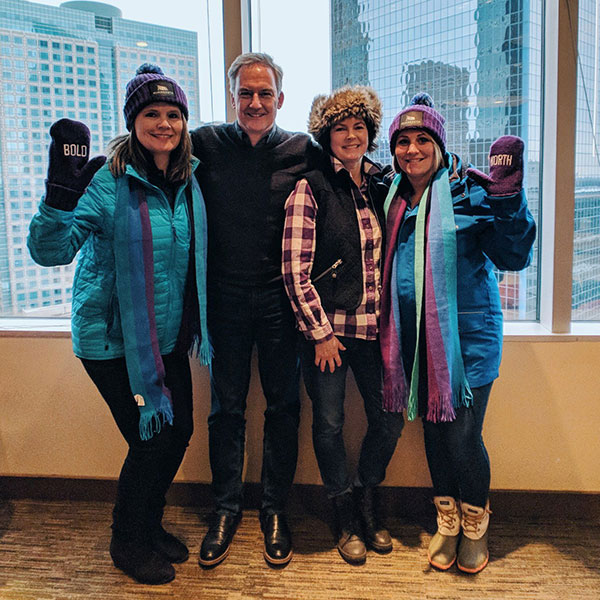 The Lacek Group is Ready, Set, Hut! for Big Game

The Lacek Group (TLG), a Minneapolis-based customer engagement agency, is proud to support Super Bowl LII in Minneapolis through the agency’s in-kind partnership with the 2018 Super Bowl Host Committee and a roster of employees who will contribute to the city’s hosting efforts prior to the Big Game on Sunday, February 4, 2018.

John Jarvis, TLG’s Chief Creative Officer, is Chair of the Marketing Committee and has been working closely with the 2018 Super Bowl Host Committee on its marketing, partnership and legacy efforts since early 2015. “It’s been a fascinating process to be a part of,” Jarvis said. “The time and effort that goes into something like this, especially when you’re dealing with everyone from local partners to the senior management of the NFL, is unprecedented.” Jarvis also had the opportunity to join the committee in Houston in 2017 for the official game hand-off to Minneapolis.

And this week, three TLG team members start their official volunteer roles with Crew 52, the official volunteer team for Minneapolis that will help direct pedestrian traffic, answer questions, hand out information and assist with events during the 10 days leading up to the Super Bowl.

TLG Senior Account Executive Cindy Johnson will be one of 4,000 volunteers stationed at the action-packed “Super Bowl Live,” the 10-day free fan festival on Nicollet Mall and is no stranger to football. Johnson is a former Minnesota Vikings cheerleader and a passionate NFL fan. “I know people who were involved in the 1992 Super Bowl and had an awesome experience, so I want to get in on some of the fun,” said Johnson. “I feel like this is a once-in-a-lifetime opportunity to be involved in an exciting local event and help show the world what Minnesota nice is all about.”

Originally from Seattle, Jessica Rehm, Art Director at TLG, will also volunteer at “Super Bowl Live” this week. “The Seahawks stadium couldn’t support a Super Bowl and it broke my football heart. But after I moved here and when I found out Minnesota was going to get to host the game, I jumped at the chance,” said Rehm. Rehm is excited to help fans around the country have a great trip here in the Bold North.

Having walked through Minneapolis skyways for the past 10-plus years, Jennifer Duesman, a Senior Account Executive at TLG will be an official Minneapolis Skyway Ambassador. “The reason I decided to volunteer was because it's that ‘once in a lifetime’ opportunity, said Duesman. “I've lived in the Twin Cities almost my whole life and I think we have so much to offer anyone who visits here. Being able to share that enthusiasm with others - especially during the coldest month of the year - is such an honor.”

“With the agency located in downtown Minneapolis, our employees get to be right in the middle of all the festivities this week,” said Chris Hoffman, Chief Talent Officer at TLG. “Whether they are volunteering or attending the events, our employees are thrilled to have the spotlight on the Twin Cities and show them how we live life to the fullest - even in freezing temps!”

As a volunteer, Hoffman will join the waste management effort on Nicollet Mall as an advocate of Hennepin County's recycling and composting educational initiatives.